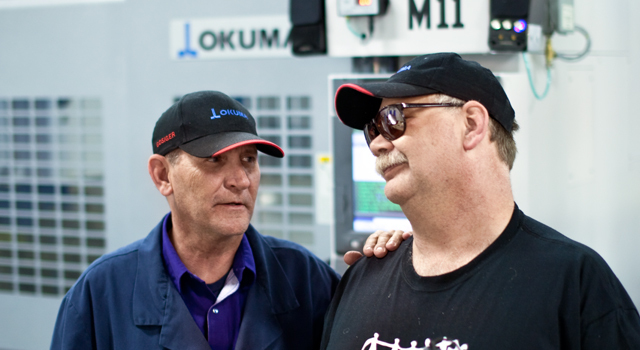 Challenge: Since 1918, the not-for-profit Seattle Lighthouse for the Blind has worked for a single cause: to create meaningful employment for people who are blind, Deaf-Blind and blind with other disabilities. In 1953, they began doing work for The Boeing Company and established a successful machine shop. As the complexity of operations evolved, it became clear that, in order to remain competitive, they would need to transition from manual to CNC machine tools.

A major equipment overhaul can be challenging under normal circumstances. But this project had a special twist. They needed not only the right equipment, but also the innovative engineering expertise required to customize their new CNC machines and create accessibility for blind operators.

Real Help: Okuma and distributor Gosiger Northwest were the only team willing to take on the challenge. The open-architecture, Windows-based CNC control was key in providing access to setting up voice-activated commands that are essential for accessibility. Productivity has increased dramatically, and today the Lighthouse is competitive with shops having sighted operators.

Orders have increased from $2,000 – 2.5 million annually, with plans to reach $5 million in the next two years. 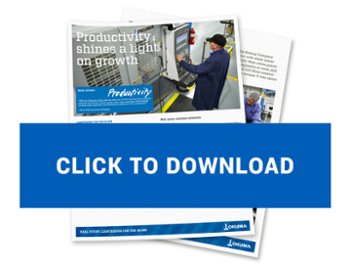 LIGHTHOUSE FOR THE BLIND

“With our Okumas, setup time has been cut in half, training time is greatly reduced, and we have better quality with fewer rejections. Even though we have blind operators, our productivity makes us very competitive.” -Harry Pike and Loren Schleppy

NOT YOUR ROUTINE MISSION

In 2005, Lighthouse General Manager of Operations Pat O’Hara made a decision. If they were to continue to be viable in the marketplace, they would need to switch from manual to CNC machine tools. And, what he had in mind was not just the usual evolutionary step. He set an aggressive goal: doubling the number, and pay scale, of jobs the Seattle Lighthouse could offer to the blind community.

At a time when 70% of blind people, and 90% of Deaf-Blind people, are unemployed, this would make a big difference in a lot of people’s lives. And with the foundation of a successful machine shop already established, it seemed right within their reach.

He had no idea exactly how to pull this off. But he knew that the Lighthouse had some extraordinarily talented and motivated people who could. All they needed was that same talent and motivation from their equipment supplier.

IT’S AMAZING WHAT CAN HAPPEN…

The machine shop journey began in 1953 when corporate neighbor The Boeing Company approached Seattle Lighthouse about doing some work. They started out with sheet metal parts that needed to be deburred, and that was accomplished successfully. Next came punch presses. Encouraged by the progress, they continued to increase the complexity of work, and today there are 70 blind people working in the Boeing machine shop, and 210 blind employees overall.

The relationship with The Boeing Company had always been unique. It was about to become much more so.

ONLY ONE WOULD STEP TO THE PLATE

The transformation to competitiveness is never easy, even under normal circumstances. Adding the accessibility challenge to the mix, the Lighthouse’s drive to upgrade to CNC machines seemed nearly impossible right from the start.

Pat established his essential criteria for the equipment search. He needed to have a local provider, with technicians trained by the factory, and availability of parts.

To address accessibility, the team at the Lighthouse knew that JAWS software was the way to go. Its screen readers would convert displayed text into spoken audio played through speakers at the work cells. Developing an audio rather than visual interface was key to the whole endeavor.

Pat invited all of the local suppliers and sales reps to consider the challenge. In this initial search for a partner, the response was unanimous – “we can’t help you.”

Around this time, Gosiger Northwest came in and set up shop as a new local player, representing Okuma. Director of Technical Sales Marc Goerlich made an introductory visit to the Lighthouse, and learned of their dilemma. He called in his own team, plus the software department at Okuma America’s headquarters, to put their heads together.

Gosiger and Okuma said yes. After a six-month planning phase, both companies sent technicians to work onsite at the Lighthouse. Within two months, the first CNC machine was on the floor, powered up and with scripts written for Phase I accessibility (conversion to audio). Today there are seven blind-accessible Okumas including three horizontal machining centers and four vertical machining centers in operation at the Lighthouse.

“It was really impressive. There was so much talent and energy from the Okuma engineers down in North Carolina,” recalls Pat. “You could hear the excitement in their voices because this was completely different from anything they’d done before. They were passionate about the project.”

“Blindness will not stand in our way”

There’s one thing that Tom’s known for amongst the Lighthouse staff. When he sees an opportunity, he insists that blindness will not be the factor that stands in their way. When good jobs and livelihoods are at stake, he rallies a must-win campaign.

“I knew the JAWS software would provide accessibility and independence for our operators,” says Tom. “Okuma’s open-architecture, Windows-based CNC control was key in allowing us access to setting up voice-activated commands. And just simple things, like having the USB ports – without that, none of this would be possible. No other control could’ve gotten us where we are today.”

The Okuma software department provided Tom with critical support by customizing the interface so the JAWS software could be added to the system. The interface was custom-built using VB (Visual Basic) language and XML for messaging. This provides a library of messages and allows access to stored messages so data can be transmitted to voice.

ACCESSIBILITY OPENS THE DOORS TO PRODUCTIVITY

Armed with access to the machines, Tom and the Lighthouse team of operators set up production. The transformation from manual to CNC machine tools yielded the expected gains, and then some.

Setup time and training time have been cut in half. Parts that previously took five days to make can now be made in two or three minutes, start to finish. Rejections have been cut way down, even with the high tolerances required for The Boeing Company’s airplane parts.

The Lighthouse objective to increase employment has been accelerated as well. Training times of up to three months have been reduced to three weeks.

Loren Schleppy, Senior CMT Specialist says “these CNC machine tools are easy to learn. It’s all laid out in a basic pattern that’s just easy to remember. It’s just like a blind person built it from the factory.”

GROWING IN THIS ECONOMY

These days, the Lighthouse crew is making increasingly complex airplane parts for The Boeing Company. And their list of new customers is expanding rapidly. Growth over the past five years has been dramatic.

According to Pat, “Because we have the Okuma CNC machines we’ve been able to grow our business. With the upgraded equipment we now have to ability to be competitive and go after POP (Purchased Outside Product) business. Plus, I know we have machines that will carry us far into the future.”

The Lighthouse’s POP business in 2005 brought in revenues of $2,000 annually. Today they’re generating $2.5 million per year, with plans to reach $5 million in two years. As this growth continues, so will the need for additional workforce. What started as an impossible dream has turned into a high-performance engine for jobs.

Harry sums it up. “Even though we have blind operators, our productivity makes us very competitive, and we’ve been able to earn the confidence of our customers.”

The Okuma machining centers make it possible for Lighthouse to operate more productively, which of course is essential in today’s marketplace. And most importantly, the path is now clear for fulfillment of the Lighthouse mission for years to come. More, higher-paying jobs will continue to be created so blind and Deaf-Blind people have the opportunity to lead productive lives with a true feeling of job satisfaction.

Pat reflects on the impact of the commitment made back in 2005. “This company, from the Board of Directors on down to the people who sweep the floor, all have a single goal in mind, to create those jobs. That kind of commitment is something I find very exciting to be a part of.”

That feeling permeates the entire organization. Loren’s good-humored remarks are representative of what can be heard around the shop. “The Okumas have completely opened the door for the blind community. I love it. There are days I don’t even want to go home. But I have to, you know,” he says with a smile.

WATCH THE LIGHTHOUSE FOR THE BLIND VIDEO