What is conversational programming? And why is it utilized?

Obtaining the highest levels of profitability is a top priority for most shops. This goal often sends CNC programmers on the hunt for technologies and processes that aid in decreasing programming time while eliminating errors and speeding up overall production. Although several programming methods exist, many shops turn to conversational programming when using multitasking machines to manufacture simplistic parts due to the step-by-step, fill-in-the-blank approach to programming.

Okuma takes pride in a ‘single source philosophy’. Our company is unusual among machine tool builders for the degree to which we design and build all our own hardware, software, and machine components. This is an important factor when discussing conversational programming and the level at which our AOT system can seamlessly support all Okuma multitasking machine tools. The consistent pairing of our in-house OSP control system and AOT conversational programming eliminates the unknowns associated with the countless combinations of control and programming platforms experienced with other machine tool brands.

There is a certain level of comfort AOT provides when looking to grow from a modest 2-axis lathe to a more complex multitasking machine tool configuration. The conversational programming user interface remains the same across the Okuma product line; however, as the multitasking models progress (for example, with the additions of Y-, W-, and B-axes), the programmer would notice added functionalities and buttons that perfectly align with the machine’s capabilities. In short, consistency in programming is key to keeping spindles running, and our AOT software has been effectively designed to remove the learning curve as new platforms and configurations of multitasking machine tools are adopted.

Software designed to simplify and work

The entire purpose of conversational programming is to reap the benefits of an easy-to-use, intuitive programming tool with quick, consistent, accurate results. For multitasking machine tools, this can often prove to be complex, yet AOT simplifies this task by asking pertinent questions during the programming process that will not allow the programmer to bypass an important machining variable. The sequence of data entry uses a table format that includes process sequence, tool selection, spindle speeds, feed rate, cutting depth, cutting time, and more. The display forecasts the total cycle time and breaks the assessment down into cutting and non-cutting time, giving you the ability to easily spot processes that can be refined for cycle time gains. If a modification is needed, even mid-cycle, this can be accomplished by editing the desired fields within the AOT on-screen table and does not require going into the complex background G-code. For simple parts, the programming time savings is monumental, turning what would normally be several hundred lines of code into quick and easy pre-defined inputs. The entire cycle process can also be previewed in AOT via 3D animation to ensure a correct finished part.

As you know, each multitasking machine incorporates processes other than turning. These can include but are not limited to milling operations, probing practices, and handoff routines. Oftentimes on competitive machines, these additional configurations will rely on the blending of the chosen control software and a third-party posting software to provide conversational programming that may or may not align well with the machine tool being utilized. Reflecting back to the single source philosophy, each Okuma multitasking machine tool is equipped from the factory floor with perfectly aligned, pre-programmed OSP controls that are proven compatible with the exact machine configuration and its capabilities. Having tightly integrated software can save you time (increased efficiency) and effort in your machining - if it isn’t tightly integrated, you risk delays and may compromise the end product. 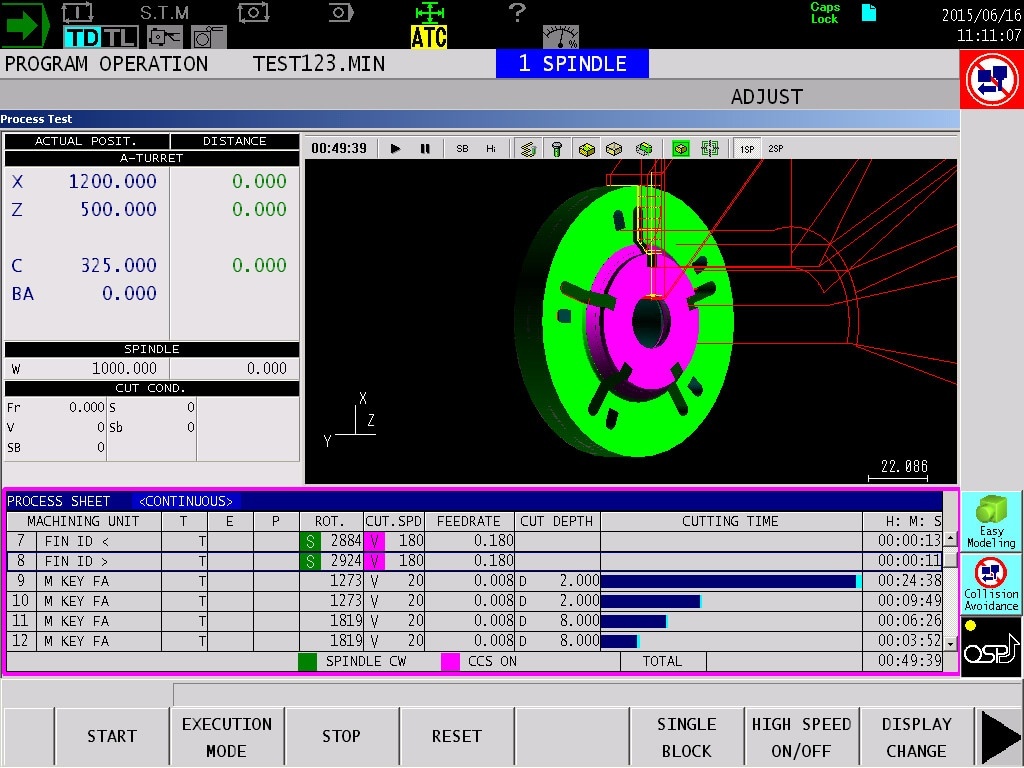 Although our AOT programming software effectively uses pre-set options, a programmer also retains the flexibility to import existing codes into the processes. This is especially important when working with multitasking machines, as many shops will have written custom NC code from secondary sources for gauging routines, specialized tool paths, etc. that may be beneficial to transfer into the current part’s conversational programming. This multi-layer approach to programming is achievable with our AOT conversational programming software.

When discussing conversational programming, the concept of standing on the shop floor at the machine controls and entering the data points directly on the screen is often the first visual that comes to mind. However, with AOT, there is a great amount of flexibility that can be achieved for the programmer in where and how the software can be accessed. AOT allows for the full software client to be installed on a personal PC – giving parties remote offline or online programming capabilities. Many shops see this remote programming option as a way to remain productive during machine cycle uptimes as they can begin on the next program while their current task is running. Program transfer can take place via USB or over an internal network.

No matter the type of machine tool being used, conversational programming proves valuable to many shop floors, especially when manufacturing simple part designs with the goals of increasing productivity and profitability. However, not all conversational programming software offers the same features and benefits and must be properly evaluated prior to making an investment that will change the way your shop floor operates.

When evaluating options available within the multitasking machine tool market, many shop owners and operators have chosen Okuma for the many benefits our Advanced One Touch (AOT) conversational programming provides.