In business since 1994, Dimension Machine has built a thriving business with customer service and continuous innovation as their mainstays. Their philosophy of “doing more with less” has kept them competitive in a crowded market. A recent expansion houses a new Okuma MB-5000H horizontal machining center with a pallet pool, allowing them to run 10 different jobs at the same time on one spindle, instead of using multiple CNC machines. 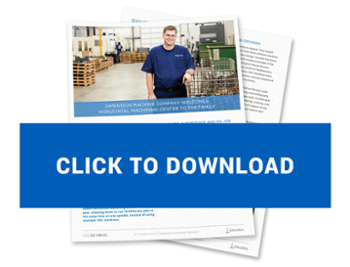 FIVE KIDS, A MORTGAGE AND NO JOB

Dimension Machine is a family business where even the customers feel cared for like they’re one of the clan. Don Barth started the business in 1994, after a new position he’d taken at a CNC machine shop in Kentucky unexpectedly fell through – just two weeks after his starting day, the owner of the shop had a stroke and passed away. “I was out on the streets,” says Don. So he and his wife Ruthann, with five children at the time, bills to pay, and no job for Don, decided to take the leap. They set up shop in their garage, with one customer to get them going.

Eighteen years later, they still have that customer. And, a thriving business powered by their 18 Okuma CNC machines - 8 CNC lathes, 10 milling machines, including a horizontal machining center. Dimension is a second home for Don and his family, who work tirelessly to provide customers with the top-notch service that has become their hallmark.

From a practical standpoint, Dimension sets themselves apart with CNC machining capabilities to produce relatively large parts. Even so, it’s their exceptional service that keeps customers coming back. With 18 Okumas, Dimension can turn on a dime and deliver fast turnarounds. They also stock parts for their customers, and with an extensive inventory, they’re at-the-ready when calls come in looking for something quickly. It happens frequently.

“It all boils down to, we get it there when they need it,” says Ruthann. “We work around the clock if we have to, and get in our truck and deliver parts to our customer.”

By IMTS in 1996, Don was ready to expand. They looked closely at three CNC machines from three different machine tool builders. Okuma distributor, Gosiger, decided that Don’s big decision should be made with inside knowledge of the expertise and craftsmanship that goes into an Okuma. They flew Don and crew to Okuma America headquarters in Charlotte, N.C., where at that time, CNC machines were built. Don witnessed the whole process, and was impressed with the quality that went into the machines.

The decision was made. Don purchased an Okuma Cadet big bore CNC lathe, and a longstanding relationship with Okuma CNC machines was born. Gosiger adds considerable value along the way with process engineering, training, and ongoing support. “Gosiger gives us a ton of support all the way around. They always help us figure out what to do,” says Don.

According to Ruthann, this is a typical buying process for Don. “Don has a lot of guts. But every time he makes a move, he doesn’t make decisions lightly. When he bought that first Okuma, he researched for almost a year. And it did very well for us. We’ve tried other brands, but they didn’t make parts every day. The Okumas make parts every day, and we see the profit coming in.”

NOW WE WILL HAVE NO OTHERS

Since that time, the shop has continually expanded. Along the way, Don experimented with other brands – but only a couple of times. Their first non-Okuma milling machine was a maintenance nightmare. “That builder lost money on us,” says Don. “Then there was the time we tried another different brand, and when the distributor came in to set it up, he looked around at our other Okuma CNC machines and said - he probably said it a dozen times - “this one is not an Okuma. It can’t do what you’re used to.”

That machine sat at Dimension for a year and a half, but not making chips. Nobody wanted to run it. “That guy was right, it really wasn’t an Okuma, and now we will have no others,” Don reflects. “To me, the ideal machine is the one I can rely on to power up every morning and make good parts all day. When we turn it off in the afternoon, we have confidence that it will start up the next day and do the same all over again. That’s why we buy Okuma.”

DON’T COUNT YOUR DAUGHTERS OUT

As Dimension continued growing, Don pondered who would be next in line to run the business. In talking with a fellow business owner, Don commented on the other’s luck in having a son to step into the business. Don’s friend commented, “Well, don’t count your daughters out.”

As luck would have it, Don and Ruthann have six daughters and one son. One of the girls, Ruthie (Brockman), completed her master’s degree in engineering in 2011. She’d spent many childhood years doing odd jobs around the shop, and decided that Dimension would become her career. Ruthie joined the business full-time upon graduation, and is learning every aspect of the business. Today she runs both a CNC lathe and a CNC mill interchangeably throughout the day. “It’s good to have family here,” says Don. Son Kevin is currently in engineering school with plans to join the business upon graduation.

Though trained in engineering, Ruthie initially had no experience running CNC machines. She had no idea what to expect when faced with her first CNC lathe. The Okuma surprised her though – she was running the lathe independently within a couple of weeks. “The first machine I ever ran was an LT-300,” says Ruthie. “All I had to do was put the part in, chuck it, press Start, and all this magic starts happening! Machine-wise, it was easy to learn. If you can run a computer, you can run that machine very easily.”

“That’s not to say there aren’t many things you need to learn about, which are actually the most overwhelming challenges - the tooling, the inserts, the parts and the workholding – I call that the ‘other stuff.’ Most of what took me time to learn was all that other stuff. But the Okuma CNC machine itself, it’s just intuitive.”

Other employees at Dimension agree. They like running the Okumas because they’re easy to learn, and easy to program. They also appreciate how the Okumas make unexpected challenges easy. Every once in a while the Dimension facility gets hit with a power outage. This can be disastrous, as any machine shop owner knows. But every time the power falters, they flip the switch back on, the machines power back up, and pick right back up where they left off.

When it comes to the CNC controls, consistency makes all the difference. Some are older than others, and there are some differences, but the process of transitioning from one control to another is simple and seamless.

Service calls are efficient as well. When the Gosiger service rep visits, he can take care of several things with one call, moving from machine to machine. It’s an unexpected benefit, but one that makes a huge difference when all you want to do is get back to cutting parts.

Training is another area where consistency creates efficiency. “We can teach young people coming in on one Okuma, then they can pick up from machine to machine, instead of starting over with each new experience. That translates into an automatically cross-trained workforce for me,” says Don.

While customer service is Dimension’s hallmark, from time to time they find themselves on the receiving end of service too. Recently they had a high-impact wreck on a machine. It broke the slide and the turret casting, and bent the ball screw. Gosiger came in and diagnosed the problem, and determined that some of the parts were in Dayton, and some were in Japan. They still had that CNC machine up and running in eight days.

“That’s not a typical problem with the machine, because it was our problem, we wrecked it,” says Don. “But it is very typical to get that kind of service and have that kind of uptime.”

“Okuma states there is 90 months’ mean time between failure on their controls, drives and electronics. We have some machines that date back to the mid-90s, and we’ve never had an electrical, drive, or board issue with any Okuma that we’ve bought new.”

The basic philosophy has always been “how can we do more with less?” In the early days, Dimension took the stance of expanding capacity by buying more CNC machines, which allowed them to run various set-ups simultaneously. “The way we used to operate was, we get busier, we buy another machine,” Don states.

As Dimension grew, they’d have multiple machining centers set up, so when a customer calls, they could start a job on one machine, deliver a quick turnaround, all while staying set up on another machine. They got to the point where most of the operators would run two, maybe three CNC machines on a shift, depending on the cycle time. Then, they evolved into multi-function machines.

“By evolving capacity and adopting newer technology, we’ve been able to get into quicker speeds and multi-function capabilities. This has enabled us to do more work and also win additional business,” says Don.

In December of 2011, Dimension added an Okuma MB-5000H horizontal machining center with an 8-station pallet pool. It has a 136-tool changer so they can set up multiple jobs and not spend time doing redundant actions. They can now do lights out CNC machining, allowing for more production hours in a day. This is a further step down the road of doing more with less.

“We’d never really looked at spindle utilization before. We’d have multiple vertical machining centers with multiple jobs set up on each one, and jump around to get the work done. It still goes back to our same philosophy of doing more with less. Now we’re just doing it by running 10 different jobs at the same time on one spindle, instead of using multiple CNC machines.”

WHAT’S NEXT? GO BEYOND

“My dad is very good at seeing the next thing on the technology horizon,” says Ruthie. “Not just what we need now, but what we can do to expand ourselves, to go beyond business-as-usual and aggressively evolve our business.” Right now, the next big thing will be incorporating a robot. “I need to get him to teach me that vision skill. But one thing I do see already. We have a lot more technology advances in our future.”