When CNC machine disaster strikes, you find out who your friends are

Challenge: PMMI is a large CNC machine job shop that produces medical devices, surgical instruments and orthopaedic implants. They’ve stuck with Okumas since 1987 because they can take heavy cuts and still run with little downtime.

On Valentine’s Day, 2005, they learned that service is another reason they’ll always stay with Okuma. A major power surge exploded every CNC machine that was running. Two days later, some machines were restored. Within 10 days, all were back in operation. They made all of their scheduled deliveries.

Real Help: The emergency service response from Okuma and distributor Morris Tristate was immediate and effective. The surge happened on a Saturday and within hours technicians were onsite and stayed throughout the weekend. Parts were flown in from all over the world and by Monday some machines were up and running again.

Satisfied customers intact, PMMI has just completed a move from a 10,000 to a 34,000 square-foot space. They’re growing into new process capabilities and new markets. 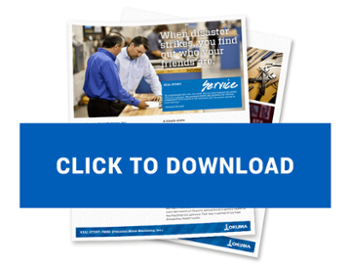 “In a catastrophe like ours, you really find out what’s behind the curtain with your suppliers. We now know, better than anybody, that the winning combination is the quality of the machines plus the proven service to back them up.”

When PMMI President Pat Funicelli started his machine shop, it was humble beginnings. Based on a successful career that took him from Navy machinist to senior positions at major corporations, his vision was to build a successful company from the ground up.

Today, PMMI specializes in serving the medical industry, where opportunity is good and the standards are very high. Nearly all of their business is in medical machining for devices, surgical instruments and orthopaedic implants.

Obviously, they’ve done a lot of things right, but it wasn’t always easy. In fact, it was nearly impossible on one memorable day.

That’s the day they needed a little help from their friends.

As they began setting up operations, Okuma was a leading candidate in the CNC machine selection process. One of their largest customers ran several Okumas, so the PMMI team decided it would be good to have compatible equipment. They were also aware of Okuma’s reputation as a quality leader in the CNC machine tool industry. This was a natural fit for their demanding market niche.

Upon getting some hands-on experience with their first Okumas, the benefits were obvious. The lack of downtime and responsive service in the field enabled them to successfully build their customer base.

Giovanni Riccardi, PMMI’s Director of Operations, started as a machinist in the early days. He recalls, “In 1987, we bought an LB15, and it did a really good job. So we bought two more Okumas and we just kept sticking with them because they’re reliable CNC machines. It’s also important to have brand loyalty so you can establish a close relationship with your service reps. Through the years, everything that was promised to us has always been delivered.”

Steve Barrows, Director of Sales, offers his perspective from years on the front lines. “Today, quality is a given. Without it, you’re out of business. The key is to be competitive on price and still remain profitable. The Okumas are our secret weapon because they have exceptional uptime and can take heavy cuts. This allows us to be efficient while maintaining tight tolerances.”

Giovanni adds, “These machines work faster and we can push them harder. You just can’t kill an Okuma.”

What PMMI calls their “Okuma fleet” (today totaling 12 machines) might never have been possible without some creative assistance from Okuma distributor Morris Tristate. Pat reflects on their early quandary. “Everyone we talked to said downtime is minimal with Okumas. The dilemma was, I couldn’t afford our first Okuma. But I also couldn’t afford not to have one.”

At this early crossroads, Morris’ service was indispensable. They provided financing expertise that enabled Pat to bring in the Okuma CNC machine he needed. This was the beginning of a relationship he values to this day.

Everyone at PMMI will always remember Valentine’s Day, 2005. This was the day the ultimate downtime did occur. It was a freak accident, one that no one could have envisioned or prepared for. The machines were victims of a surprise attack of unbridled electricity.

It was 6:55 a.m. on a Saturday. The PMMI shop was running blanket orders for their OEM customers. Pat was there, keeping an eye on things. The whole company was working overtime, pulling together to keep up with customer demand.

Suddenly, all the lights flashed brightly and blew out. Chaos ensued. The machines were popping and sizzling. To everyone’s horror, they saw smoke and flames shooting out the back of the machines. Boards were burnt and blown. Every machine that had been in cycle was inoperable.

The incident was caused by utility workers who inadvertently released an unrestricted, high-voltage surge through the power lines. Anything running on electricity in that part of town was fried, from MRIs and lottery machines to household televisions.

Back at PMMI, it was Armageddon. Pat recalls, “I thought it was the end of the world. Instead, we all took a breath, got our thoughts together and started to take action. That’s where the story really starts.”

WELCOME TO OUR NIGHTMARE

Sixteen machines were down, but the PMMI team knew that the deliveries to their customers could not be compromised. This had the potential to set them back for months. The company and the employees’ livelihoods were at stake.

The first call went out to Morris Tristate.

“I told them that we had a problem,” said Giovanni. “I explained what happened, and immediately started getting lots of calls from the service guys from Okuma. They came in on Saturday and Sunday to help us with the CNC repairs. Their immediate response was, 'We’ll be right there'.” “They sent mechanical and electrical specialists just to get us going.”

A critical aspect of the restoration process was locating Okuma spare parts to replace those damaged during the power surge. According to Steve, “Some of our machines were old enough that they had to locate parts in Japan as well as Charlotte. The people at Morris and Okuma really searched, trying to find components that hadn’t been made in years. They were actually finding things on customers’ back shelves and in closets that people forgot about. Parts were flown in from all over the world.”

Miraculously, by Monday, some of the machines were up and running again. The employees who were sent home on Saturday were called back in and they started running triple shifts to maximize the time in the repaired machines.

Within 10 days, all the CNC machines were back in operation and they made all of their scheduled deliveries. In fact, most of their customers never even knew what happened.

The PMMI team laughs about it now, and it’s one of their favorite stories to tell. Since something this extreme will never happen in most shops, they like to share the horror story as a lesson of what’s possible when the right team pulls together.

“Sure, it had to happen to us, right?” says Steve. “In a catastrophe like ours, you really find out what’s behind the curtain with your suppliers. In our case, we had Okuma and Morris Tristate, two world-class companies, pulling out all the stops just for us.”

“We now know, better than anybody, that the winning combination is the quality of the machines plus the proven service to back them up.”

BACK TO GROWING THE BUSINESS

Satisfied customers intact, PMMI has just completed a move from a 10,000 to a 34,000 square-foot space. The Okuma fleet has a spacious new home and Pat no longer needs to walk around with a tape measure and a shoehorn every time they decide to add a machine. The new facility is efficiently laid out for production. They’re growing their customer base in existing markets, creating inroads in some new ones, and expanding the scope of work they’re doing. “In all our years of doing business, we’ve learned many things along the way,” says Pat. “I think the most important thing is, knowing who your friends are, and sticking with them.”