Since the purchase of their first Okuma CNC machine in 2005, Ontario, Canada-based Lumar has undergone a transformation that puts them on a fast track for growth. Lumar’s Okumas make it easy to set up jobs quickly and sustain high precision and repeatability, critical factors in serving their low quantity/complex part market. In 2012 Lumar’s sales more than doubled, resulting in their best year to-date. The company’s new 25,000 square foot space will allow them to add more machine tools to their fleet and win even more work. Believing in, and investing in the future is paying off for Lumar. 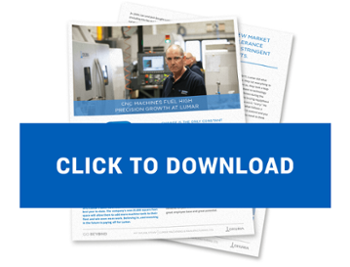 CHANGE IS THE ONLY CONSTANT

Ian Wagter follows in the engineering footsteps of his father Jack Wagter, and together they own Lumar Machining and Manufacturing. The two share a knack for not only the precise technology they employ everyday, but perhaps more importantly, for sparking transformation. Prepped by many years in a variety of manufacturing plant environments, the day finally came when Ian proposed that they go into business for themselves. With this step, Ian and Jack embarked on a journey where change is the only constant – because change can be the best way to stimulate growth.

Ian and Jack decided to look for a local business to purchase, and the top candidate was Lumar, a small, family-owned shop established in 1984 in St. Thomas, Ontario. Though the shop used only manual equipment, (and their most sophisticated piece of technology was a fax machine!), Ian saw the possibilities. Lumar’s customer base at the time was centered on just two automotive companies, but they had a great employee base and great potential.

In 2000, Ian and Jack bought Lumar and all of its assets (including the fax machine). The early years involved a learning curve as Ian made the transition from process engineering in large plants to taking on a general machine shop.

CHANGE IN TECHNOLOGY, CHANGE IN MARKETS

By 2005 it became clear that in order to grow they needed to embrace CNC technology and leave behind Lumar’s old manual ways. So they purchased their first Okuma, a CNC mill. But as Lumar progressed into becoming a CNC shop, the seas around them became choppy. The automotive industry fluctuated wildly, so they set out to diversify their customer base. As they got involved in new markets, they made an important discovery: a shortage of good machine shops that are willing to take on the challenges of tight-tolerance parts with stringent inspection and accountability requirements. The Lumar team aggressively pursued this market gap, obtaining their ASE certification in 2005, an ISO 9001:2008, then a controlled goods certification and military clearance by 2012.

NO GUTS, NO GLORY

With the recession that followed 9/11, Lumar did what most manufacturers did to survive: they cut everything to a minimum and sweated it out. Even so, they took a leap of faith and continued their commitment to technology transformation, purchasing CNC machines during the downturn. When asked how it felt to be buying equipment during this time Jack responds with one word, “scary.” He adds “I think people tend to forget that what follows a downturn is an upturn. As long as you’re in control and you know things have gone well previously, you need to think ahead at those times.”

The recession did have a silver lining. There were several auctions at the time and they were able to purchase two Okuma MC-V4020 CNC mills, one with a fourth axis. One of these machines was almost brand new. It had only 200 running hours on it, even though it was a 3-year-old machine. Because of Ian and Jack’s ability to look forward while others were hunkered down, they were able to take advantage of great deals in the marketplace. And their Okuma journey was underway.

Happy with the first Okumas, Ian began to shop for heavier equipment, in particular a CNC lathe. Ian conducted diligent research, calling shop owners who owned various brands of equipment. As he made his calls, Ian focused on questioning about service, with the idea that this would tell him the most about what he could expect from his investment. In talks with Okuma owners, he repeatedly asked, “How is the service from Okuma?” Repeatedly, he got the same response – “What service?” The Okuma owners went on to explain that they’d never had a need for service. With these strong endorsements, Ian bought his first Okuma CNC lathe, a Captain L370. Soon after, he purchased a Captain L470 with C-axis milling. The Captains provided a solid equipment foundation that enabled Lumar to demonstrate their strong turning capabilities and continue building their customer base.

Ian marvels at being among the ranks of Okuma owners and their low-service lifestyle. The only thing he’s ever had to replace is a light bulb in one machine. “We’ve had no maintenance issues whatsoever on the equipment”, says Ian. “Uptime has been a constant with our Okumas.”

Lumar’s Okumas make it easy to set up jobs quickly and sustain high precision and repeatability, critical factors in serving their low quantity/complex part market. Beyond this they also identified further opportunities in larger parts. Ian recalls “that’s when we brought in the Okuma LB4000 EX horizontal CNC lathe with the Y-axis milling on it. I wanted to keep going with the high precision and keep stepping it up.” With a 1.5-meter turn length with Y-axis milling, and a steady rest and tooling for deep drilling and boring, the LB4000’s size capability attracted substantial new work for Lumar.

As sales growth continued, Ian scoured the market for another used MC-V mill, but because these machines have a reputation as being very solid, they were tough to find. “Any used Okuma MC-V would be on the market for about a day. If you didn’t catch it right away and have your check in hand, you weren’t going to get that machine.” Brendan Cunningham, of Okuma distributor EMEC Machine Tools knew about Ian’s search. Together they set their sights on a new GENOS M560-V vertical machining center, and Brendan worked tirelessly to make sure Lumar could add that machine to their shop. Ian was astonished at the result. “Even though I’ve always believed firmly in the MCVs, my experience with the GENOS was night-and-day incredible. I thought the MC-V was a solid machine, and this thing just blows it away. It’s got the dual contact spindle, which is a big plus, and the 30 horsepower with tons of torque. We’ve had very good success with that machine.”

Having the right machine tools is half the battle. As Lumar has evolved from a manual shop into a high precision, high technology environment, this also placed demands on the employees. One of the original assets that made Lumar appealing was its quality workforce. As the company evolved into new markets and into CNC machine technology, the employees needed to reinvent their skills. The transformation here was as dramatic as with the machines. One example is an operator who was initially very resistant to learn the new technology. But according to Ian, “he’s an exceptional machinist, and he dug in and became the operator of our first CNC lathe. Now he does a great job with that machine. Since then, he told me if we hadn’t gone this route, we wouldn’t be in business right now. I have 100% confidence in the Okuma equipment. I know my crew does too.”

With new technology and a newly trained workforce, Lumar successfully gained a foothold serving high precision customers in several new markets. While they still have some automotive work (and still retain their two original automotive customers) they’ve added recreational products, where they make parts for a London-based skull manufacturer that sells rowboats for use in Olympic competition. They rough out landing gear for aerospace manufacturers. A particularly strong market is oil and gas, where they make parts for use in downhole applications. Much of their oil and gas production involves shipment of raw material from Texas, which Lumar then machines and sends back the finished parts. Having steady customers from as far away as the United Kingdom and southern United States is a testament to Lumar’s success in filling the high precision niche.

Making investments in CNC machines, upgrading workforce skills, and diversifying into new markets are enviable accomplishments. And this substantial transformation occurred in a relatively short time frame – just eight years since their first Okuma. Distributor EMEC sprints alongside Lumar, anticipating their equipment needs and finding ways to fill them. In 2012 Lumar’s sales more than doubled, resulting in their best year to-date. According to Jack, “we’re realizing excellent return on our investments.” The goal now is to triple their business in the next three years.

The Okuma CNC machines brought in to fuel their growth have more than paid for themselves, but the busy shop is now bursting at the seams. This is a problem that spurs any shop owner into action, and Ian has found their new dream home, less than a mile from their current facility. The new space is 25,000 square feet, which will allow them to spread out from their current 6,000. Ian has the floor plan all mapped out, including a large space he’s saving for the MULTUS B750 multitasking lathe he intends to add. “Endless opportunities are ahead of us,” says Ian. “We have lots of plans, and hopefully a great future.” Believing in, and investing in that future is paying off for Lumar.